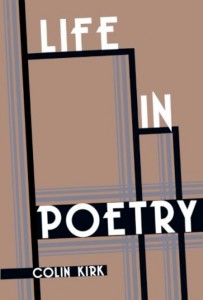 LIFE IN POETRY has poetry interspersed with accounts of unusual life time experiences and glimpses into the lives of poets and their contributions to the poetry of the past century, as dominated by the influence of teenage Arthur Rimbaud, who pointed out to flowery poets that real flowers get spoiled with spit and shit, there is no such thing as poetic license, truth and accuracy are essential and love is lust romanticized. English poetry was never the same again after Wilfred Owen introduced these notions of Rimbaud's when he returned from Bordeaux before World War I. There are poems written in America and North Africa as well as in Eurasia.

Interest in political philosophy is attested to by an essay reprinted from The Philosopher, an extended review of Régie Debray's Praise be our Lords, which is compared, not unfavorably, with Machiavelli's The Prince. Debray was with Che on the Bolivian adventure that ended Che's life.

Influence of this book on the subsequent poetry is obvious. Places seminal to the development of the notion of the sacred are investigated. The Castalian Spring and Python's Cave at Delphi, Olympia in Greece, Abydos in Egypt, Temple Mount Jerusalem and Mont Saint-Michel in France are described, delighted in and brought down to earth. Relevance of these sites to problems of today are considered with inevitable concern about the future.